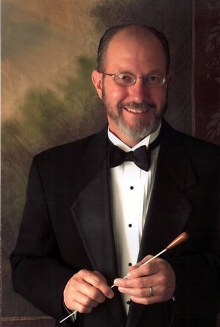 Appointed in May 2004 as the Conductor and Artistic Director of the Hastings Symphony Orchestra, Dr. Byron Jensen begins his eleventh season in that capacity and twelfth year at Hastings College where he is the first faculty member to be designated as a Distinguished Professor in Music in that department’s history.

Dr. Jensen brings nearly thirty-eight years of experience to the podium as an educator, conductor, performer, and administrator. His responsibilities with the HSO include developing programs, ordering and distributing music, selecting guest soloists and music, fielding and rehearsing the orchestra, assisting with procuring grants, informing the Board of the orchestra’s progress, developing a vision for the HSO, promoting the organization, and submitting musician pay. Responsibilities at Hastings College include teaching and recruiting students to the strings studio, teaching courses in music history and music education, and conducting the Hastings College Handbell Choir. He also conducts both the Chancel Choir and Bell Choir at the First Presbyterian Church in Hastings.

From 1990 to 2003, Dr. Jensen taught at Ottawa University in Ottawa, Kansas where he chaired the Music Department, served as Dean of the College for two years, and conducted all instrumental ensembles. The OU Bell Choir was recognized as one of the finest ensembles of its kind in the Midwest and traveled throughout the United States as ambassadors for the university.

Dr. Jensen maintains professional memberships in the College Music Society, the National Association for Music Educators (NAfME), the Nebraska Music Educators Association, the American String Teachers Association, the Handbell Musicians of America (Nebraska board member and secretary), and the United States Golf Association. He is an honorary member of the Phi Mu Alpha Sinfonia Fraternity (Xi Alpha Chapter), and is a “Friend of the Arts” through the Sigma Alpha Iota Fraternity (Eta Nu Chapter). Dr. Jensen and his wife, Deb, have two children, Hannah (a second-year senior at Hastings College), and Nathan (a sophomore at Hastings College).

Due to Covid-19 and CDC guidelines we will not be doing concerts at the Masonic Center until after January 2021. Please watch newspaper and radio ads as we will be doing virtual concerts on Facebook starting in October 2020.